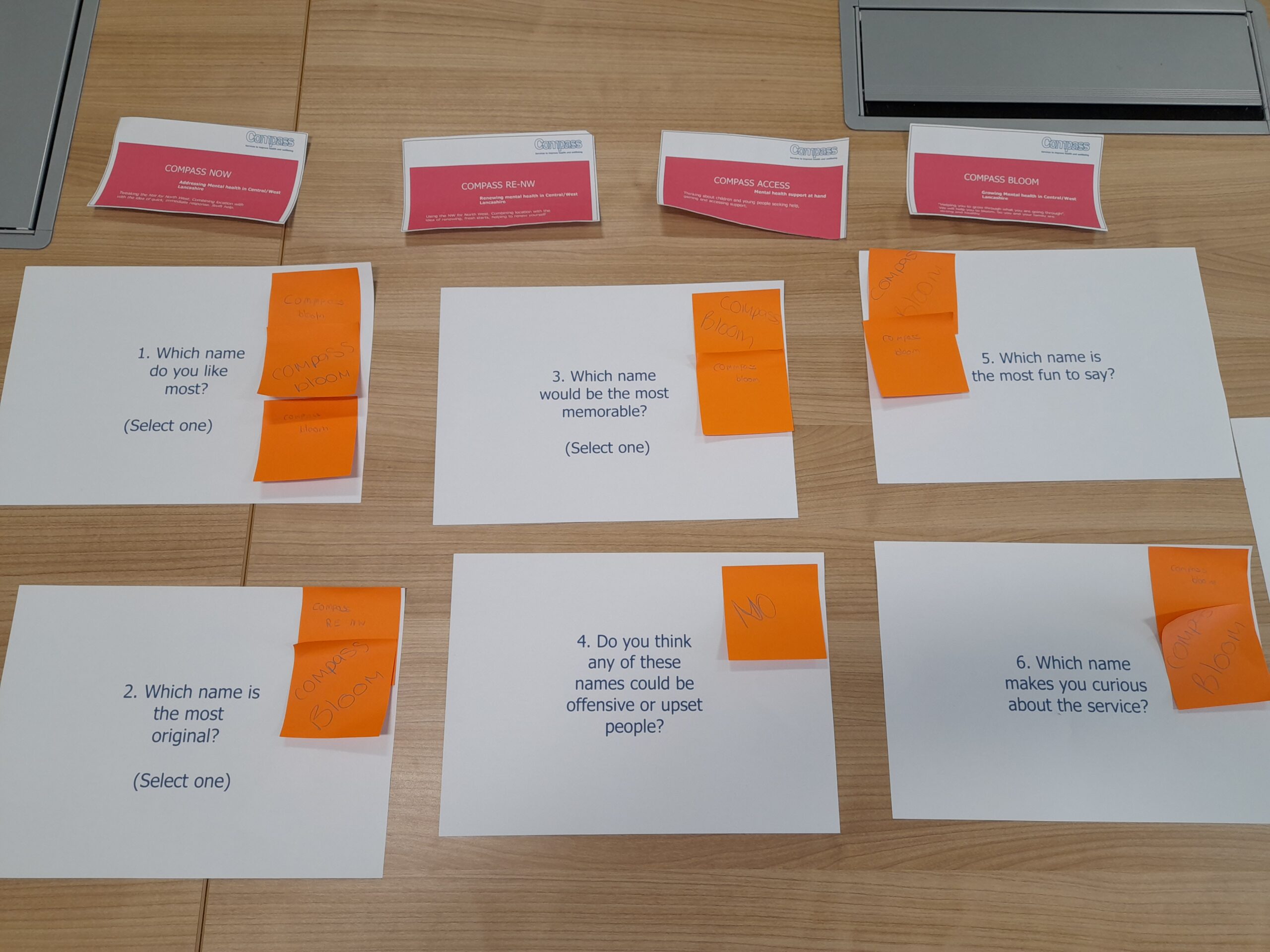 Children and young people in West and Central Lancashire are being consulted in an on-going project to find a new brand and a brand new name for the service.

An outside agency was employed to come up with several suggestions for names after we supplied them with a branding brief.

An initial five suggestions were discussed with our commissioners and three went forward to be presented to a meeting of staff assigned to discuss them with children, young people and schools staff at events taking place during the school holidays.

The three ideas were…

Compass RE-NW – Using the NW for North West. Combining location with the idea of renewing, fresh starts, helping to renew yourself.

Compass NoW – Tweaking the NW for North West. Combining location with with the idea of quick, immediate response and swift help.

However, during the meeting with staff, one colleague mentioned that trainee EMHP Romy Kale had her own suggestion for a name.

Romy duly gave it in the meeting: Compass Bloom – relating to helping people to grow and develop.

Saffron Mason, Compass Implementation & Project Manager, who was at the meeting with the staff, said: “Romy’s suggestion just seemed to really capture the essence of what we’re trying to do. The mood in the Teams “room” was clear – people loved it. Including me.”

A Compass PowerPoint presentation, produced by our Marketing and Communications team in conjunction with the agency, was quickly updated to include Compass Bloom. It asked for responses to these questions –

2. Which name is the most original?

3. Which name would be the most memorable?

4. Do you think any of these names could be offensive or upset people?

5. Which name is the most fun to say?

6. Which name makes you curious about the service?

7. Can you think of a name yourself

Staff were asked to think how they could best present the survey and they were given permission to buy materials to help children and young people engage in the session.

The options and questions were then put out to the MHST staff as a whole and their reactions gathered.

Survey sessions were held with children and young people the MHSTs area.

Our staff in West and Central Lancashire

How trainee Alex surveyed five to seven year olds at an infants school.

She said: “Staff were given a more in-depth explanation as thee children were just five to seven years old and had lots of other activities to choose from.

“We had a simple vote on the best name and tag line before attention was lost whereas staff gave some reasoning with their votes.

“We didn’t get to think of our own names/design logos as the CYP had already done arts and crafts/ colouring and wanted to play outside.“

Alex’s thoughts – Having consultation with childen and staff that work in the schools and giving them a say in the future face of our service shows that we value their opinion and gives them real influence on our service, putting power in their hands.

Romy said: “Jen and I had a lovely evening meeting the young people at Chorley Youth Zone and some lovely work took place. We used fantastic “positivity pebbles” the young people created to help engagement.”

Q2- Which name is most original:

Q3- Which name is most memorable-

Q4 Are any names offensive to anyone?- No to all names

Q5-Which name is most fun to say?

Q6- Which name makes you curious about the service?

Q7- Any of your own suggestions?

How Gemma surveyed 8 to 12 year olds.

Trainee EMHP Gemma said: “I delivered the re-brand information to the 8-12 year olds at Chorley Youth Zone this evening.

“Speaking to the children, they seem to travel from a wide area, throughout Central Lancashire.

“The children came in in groups of three or four at staggered intervals while I was there. The children gave feedback on post it notes and I had discussions with them throughout.”

‘I think this is good because the next generation needs support’

Comments on why Compass RE-NW was their favourite:

Comments on why Compass Now was their favourite:

Comments on why Compass Bloom was their favourite:

2. Which name is the most original?

Compass Now – ‘Compass Access because it is a very said word’

3. Which name would be the most memorable?

4. Do you think any of these names could be offensive or upset people?

Nobody said they thought the names were offensive or upsetting – some comments were:

‘No they are all lovely’

‘all of them are nice and amazing’

‘No! because none of them are offensive’

5. Which name is the most fun to say?

Bloom – ‘it feels pretty and nice to say’

6. Which name makes you curious about the service?

Bloom – ‘it sounds creative like it is making someone happy’